As President Obama observed in his 2012 State of the Union Address, “American oil production is the highest that it’s been in eight years.”

This is truly exciting news. Just five years ago, US oil production was on a multi-decade decline that was widely expected to be terminal. Then, all of a sudden, production began booming–and today we are producing 7.3 million gallons per month–22% more than expected.

What caused this turnaround? 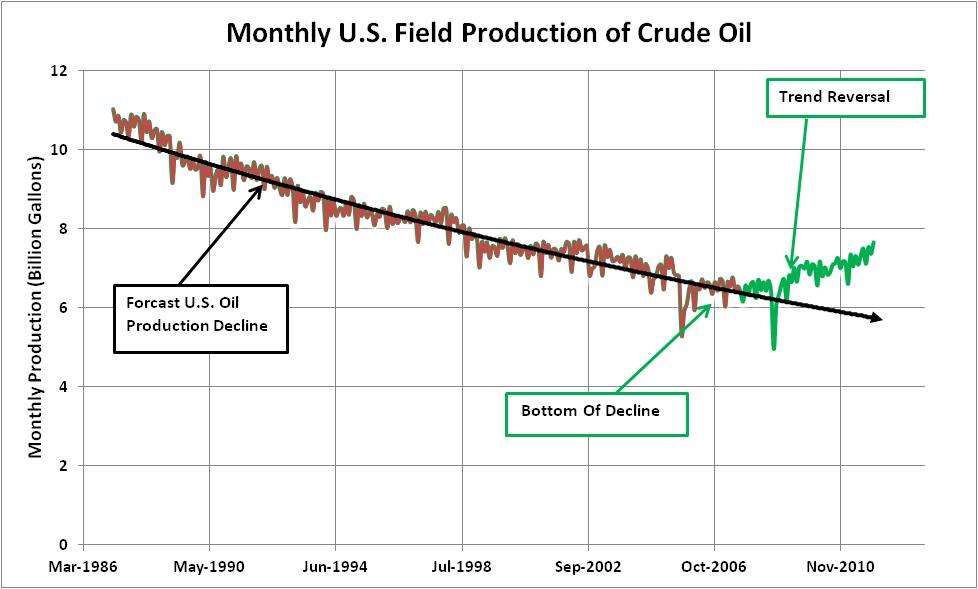 Was it new, major discoveries of oil deposits? Interestingly, no.

Because the US has the world’s best protection of mineral rights, it has the most drilled, developed, and studied oil deposits of any country. As a result, dramatic finds are less likely to occur in the US than less-explored countries. But the US’s superior property rights made possible something even better than a new oil find; a new applied technology that turned previously useless oil deposits into oceans of black gold.

Not all oil is created equal. Crude oil exists underground in a vast variety of forms that require vastly different degrees of difficulty to extract. All forms of oil exist in some form of rock that must be drilled in to extract, but that rock ranges from highly porous and permeable, which enables relatively easy extraction oil, to highly imporous and impermeable shale rock, in which the oil is trapped so tightly that it seems impossible to extract.

Fortunately, the American oil industry specializes in the impossible, and in the last several years it has figured out a way to squeeze oil out of rock.

Take the case of the Eagle Ford Shale deposit. This deposit lay thousands of feet below the lands of South Texas, where it has been cooking and creating oil for millions of years. Up until 2008 it was essentially non-productive. The Eagle Ford is a deposit of shale “source rock,” aptly named because it is within these rocks that oil and gas are created over geologic time–that is, very, very slowly.

Source rock is the ultimate source, but not the direct source, for traditional oil extraction. Over millions of years, geologic forces including high temperature and pressure squeeze small droplets of oil and gas from source rocks. These droplets slowly migrate upward through cracks, fissures, and spaces between rock grains into overlying oil pools where they are trapped and stored. Historically, oil reservoirs are these pools of stored oil.

To give you a sense of how slowly this process occurs, the hydrocarbons generated by source rocks typically travel underground at around 1000km/million years or 3.3 feet per year. With current U.S. consumption on the order of 20 million barrels per day, a natural fluid flow velocity of 3.3 feet per year is of no practical value.

And yet now, the Eagle Ford source rock has, analysts suggest, the potential to produce over 2% of U.S. daily oil consumption, over 17 million gallons per day. How? By developing and applying technologies that solved two crucial problems: the tightness of the source rock and the inaccessibility of the source rock.

The tightness problem is this: in the source rocks, the spaces between rock grains and existing cracks within the rocks are too few and too small to allow large volumes of oil to flow at a high rate. The Eagle Ford’s permeability, a measure of the natural ability for the rock to flow fluids, is thousands of times lower than the typical  reservoir rock.

This flow rate made the Eagle Ford only valuable to the extent we could access the oil that had naturally flowed from it over millions of years. And indeed, enormous amounts of oil and gas migrated through natural fractures and fissures into a reservoir known as the Austin Chalk formation. The Austin Chalk formation has been explored and produced from since the First World War. By 2008 over 150,000 wells had been completed in the Austin Chalk with a cumulative production of over 2.5 billion barrels of oil equivalent. (An aggregate measure of total oil and gas production.) In 2010 the U.S. Geological Survey estimated that there were another 957 million barrels of oil, 3.6 trillion cubic feet gas, and 363 million barrels of undiscovered natural gas liquids in the Austin Chalk, Tokio and Eutaw Formations.

But none of this came from tapping the source directly–which, if it could be done, would be the ultimate prize. Oilmen looked at the stunning numbers from the Austin Chalk, knowing that the source of all this bounty, and potentially greater abundance, was imprisoned in the low permeability Eagle Ford source rock. The industry spent untold millions of dollars and untold hours of research and invention to the goal of liberating this oil.

And they did. The key to getting oil from tight source rock is “stimulating” it to produce oil via hydraulic fracturing (aka fracing). Hydraulic fracturing entails pumping high volumes of fluid mixed with sand down oil wells at incredibly high pressures, cracking open the rock to the point that oil can flow. The cracks are held open under pressure long enough for sand to be pushed inside them, propping the cracks ajar and creating effective fluid flow paths. This creates a matrix of micro-fissures that allows the oil to flow free at a rate well in excess of the natural migration of fluids to the Austin Chalk. Engineers can now bypass the multi-million year process of fluid travel through rare natural pathways by effectively building millions of highways of fluid transport corridors that all feed to the well.

That said, hydraulic fracturing by itself was not enough to unlock the Eagle Ford shale–not economically, anyway. Oil companies had to overcome the problem of the Eagle Ford’s limited wellbore contact with the reservoir that existed with conventional vertical wells. Below the surface of the ground there are many different horizontal layers and types of rocks, sedimentary, igneous and metamorphic, based on geologic history. A given oil field is thus bound to be far wider than it is vertically thick. The more free-flowing the oil is, the less of a problem it is for a standard vertical drilling operation, because the more oil from one area can migrate to another. But if we are dealing with a tight source rock that must be fractured, and the fracturing radius is very limited, it is incredibly inefficient to drill thousands of feet underground with vertical well after vertical well.

In the case of Eagle Ford, the deposit averages only 250 feet of vertical thickness but horizontally it underlies 30 counties in Texas covering millions of acres. A conventional well could only access the 250 feet of vertical formation thickness, so that even by hydraulically fracturing this 250 feet, a well could not be made to flow at economic rates. The technique of horizontal drilling solves this problem brilliantly.

A horizontal drilling operation will drill down to whatever depth is necessary to reach the desired layer of rock and then make a horizontal turn to access the layer head on. This is a staggering technological feat; a drill bit is navigated underground through solid rock 10,000 feet below the surface, and then turns so that it drills another 8000 feet in a horizontal direction, all with the aim of hitting a 35 foot square target. This advancement took over a hundred years to develop and its evolution has not stopped. 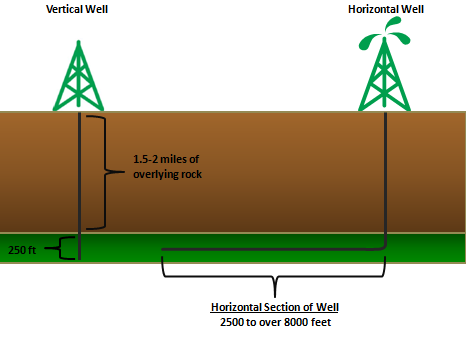 In the Eagle Ford and elsewhere, by hitting the horizontal source rock horizontally, drilling operations can fracture one section of rock after another without needing to drill a single additional hole in the ground.

And this is just one case among a growing many.

This increase in value creation is being repeated all over the country in places such as in North Dakota where the Bakken source rock is responsible for North Dakota’s recent assent to third highest oil-producing state. And these technologies have been even more productive in extracting copious quantities of oil’s geological cousin, natural gas.

It is no accident that all of this occurred in the country with the greatest respect for mineral rights in the world. And as politicians deride oil production with cliches such as “drilling won’t solve our problems,” we should remember that the freedom to drill has made every American’s life better with Eagle Ford and other triumphs.